I’ve been planning to write a post about my praise jar for about a week, but I just haven’t. I’ve been super-overwhelmed with a lot of things, (mostly Bennett and his notsleeping), and so I’ve put it off. Today, however, is so full of praises that I figured it was the very best day to write this post!

My neighbor, Rebecca, posted a very Pinterest-y idea the other day on Facebook:

I thought it was brilliant! I decided to make my own, with the specific intention of its being for praises. So here’s mine: 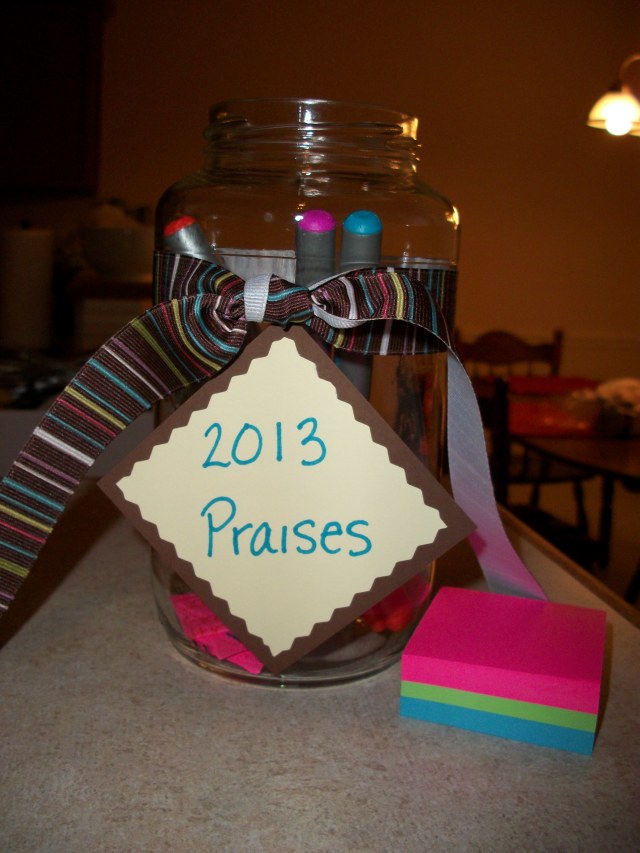 No, I don’t dot my “i”s. In print. I do dot them in cursive. And yes, my jar is small. That’s what I had on hand. I’m hoping to upgrade when it gets full! Anyway, I wanted to make sure that my jar was prominently displayed in order to remind me of it, and I wanted to make sure that it was clear that this is all about making note of everyday praises. At the end of the year, I can look back and praise God very specifically for all the ways He blessed me during 2013! Awesome! I’m so excited, and I’m extra excited today, which is why I’m posting this particular post at this particular time.

I put several praise post-its in my jar today.

(You should make a praise jar, too. It’s too easy to forget or ignore the good things when there’s so much crumminess around that’s too easy to dwell upon.)

Urge bondslaves to be subject to their own master in everything, to be well-pleasing, not argumentative, not pilfering, but showing all good faith that they may adorn the doctrine of God our Savior in every respect.

Obviously this passage is referring to literal slaves who legally belonged to their masters. Since that’s not really part of our culture, I often ignore or skim passages like this, or I loosely and not very seriously apply them to an employee/employer situation. Today, however, I was reminded that I am the bondslave of the Lord, just like Mary and Paul. I need to be absolutely obedient and not argue back! While the “master” referred to in this passage may well have evil intent, my Master does not — so how much more should I obey Him! What I struggle with is discerning His voice, so I need much help from the Holy Spirit. Even so, there have definitely been times I’ve been really pretty sure, but said no or protested before relenting. Often in the latter situation, where I finally just give in, I hold back or don’t completely obey. That’s a kind of pilfering, really. I’m holding back something for my own gain, usually the avoidance of embarrassment, awkwardness, or inconvenience. So this passage about bondslaves in the ancient world? Totally about me. If I learn absolute obedience, the total yielding of my will to God’s, then I will adorn the doctrine of God our Savior, a doctrine which is explained in the following verses:

For the grace of God has appeared, bringing salvation for all people, training us to renounce ungodliness and worldly passions, and to live self-controlled, upright, and godly lives in the present age, waiting for our blessed hope, the appearing of the glory of our great God and Savior Jesus Christ, who gave himself for us to redeem us from all lawlessness and to purify for himself a people for his own possession who are zealous for good works.
(Titus 2:11-14 ESV)

My job here, on this earth, is to give my life over to the beauty of God’s will. In a way, I’m like an ornament meant to accentuate the beauty of God and His redemptive plan. What an honor it is to adorn the doctrine!

**AUTHOR’S NOTE: Please read all the way through, including the comments. I learned even more about this topic from the first commenter, to whom I am very grateful. I agree with her and her convictions, now that I know more of the truth.

It may be no great revelation to you that the IUD, which is a popular and long-term form of birth control that involves surgically implanting a device into a woman’s uterus, can cause what some might term a miscarriage as one way to prevent pregnancy. It was a revelation to me, however, earlier today.

It all started with Hobby Lobby. A friend posted an article supposedly written by the CEO and founder of Hobby Lobby, David Green, stating his defense on his company’s stance to defy new government healthcare laws that requires companies to offer medical coverage for emergency contraceptives. Like most things posted on Facebook that are polarizing and attributed to some person in authority in order to lend credence to a particular viewpoint, I checked it out on Snopes. It turns out that the CEO did write the article, and you can find it online under the title, “Christian Companies Can’t Bow to Sinful Mandate.” After confirming that it was true, I re-posted the link my friend had posted because I agree with Hobby Lobby’s pro-life stance, and I stand by their right to follow their conscience on this issue.

This post, however, is not mostly about Hobby Lobby. That’s just the background for why I’m writing about IUDs. It was in the Snopes article, which I linked to above, that I read this sentence:

Hobby Lobby has filed a federal lawsuit challenging that mandate because it includes such contraceptives as the morning-after pill and IUDs, which the plaintiffs consider to be forms of abortion.

I read that sentence aloud to my husband this morning, and we were both surprised. The morning-after pill, sure. That’s the point of that one, right? To prevent the implantation of the already fertilized egg, if there is one. But we were both surprised to see that the IUD was considered to be in the same class, at least by the folks running Hobby Lobby. So, I did some research online. It’s not any big secret, apparently:

While I do not use the IUD, or any form of hormonal birth control, for that matter, I have friends who do. Since contraception is a personal issue, I likely have many friends who have the IUD, but I don’t know about it. That’s why, after praying a lot this morning, I decided to write a blog post. If the sources above are telling the truth, then the IUD can cause what could be considered an abortion by folks like me who believe life begins at conception, which is before the implantation of a fertilized egg. As I prayed about how/when/with whom to discuss this, I felt led to this verse:

Older women likewise are to be reverent…teaching what is good, that they may encourage the young women to love their husbands, to love their children… (Titus 2:3-4)

That’s why, young women, I’m pleading with you to love your children. Be aware of the choices you’re making with your body and how they might affect your unborn children without your knowing.

Of course, I am fully aware of the natural implications of what I’m asking; if you currently have an IUD, then I’m ultimately encouraging you to consider undergoing surgery to have it removed and then reconsider your contraception choices to see what is safe for a fertilized egg and what is not. This is why I prayed so much about it this morning, and even asked a couple of friends to pray with me. It’s uncomfortable for me to give unsolicited advice to anyone about their birth control, especially given the lengths one might have to go to if she decided I was right. But seriously, the answer is clear to me: Love your children. I couldn’t NOT say something.

I tell you this because I love you, and I love your babies. Pray about it, please, if this applies to you. I know that I would have any surgery in the world if it kept my little boy alive. Wouldn’t you?

*Disclaimer: I am not a medical professional. I am a pro-life Christian who believes that life begins at conception, and I posted this in view of my own conscience out of obedience to what I feel is the Spirit’s leading. Like I said, I couldn’t NOT say something.

Well, I’m in the same situation I was in about a month or so ago, with a little time between scheduled Bible studies. I haven’t decided for sure whether I will be participating in Good Morning Girls’ Luke study, which begins on January 14, because I’m not sure what the ladies’ group at my church will be studying or what my husband and I may decide to study together. Regardless, I am faced with a few weeks with nothing scheduled for me, so I have decided to study Titus! I really enjoyed my earlier study on Jude, and I wanted to invite you to join me for a similar journey through Titus. I think it will be great!

I will be following the Good Morning Girls’ SOAP Bible study format, which I invite you to do as well! I’m still loving this approach to Bible study, so I’ll be continuing it. Here’s how it works:

S– The S stands for Scripture- you physically write out the scripture……you’ll be amazed that what God will reveal to you just by taking the time to slow down and actually write out what you are reading!

O– The O stands for observation- what do you see in the verses that you’re reading. Who is the audience? Is there a repetition of words? What words stand out to you?

A– The A stands for Application- this is when God’s Word becomes personal. What is God saying to me today? How can I apply what I just read to my own personal life? What changes do I need to make? Is there an action that I need to take?

That’s it, once again! Simple, yet powerful. So grab a Bible, a journal, and a pen, and feel free to join me. Many blessings, and Merry Christmas! (Don’t let the holidays be an excuse to let your Bible study slip… If you’re not doing this, do something!)

Be a Blessing,
Angela