Today was game day! The Mariners/Blue Jays game was the only thing on our agenda, so we weren’t sure exactly how to spend our morning. We decided to go ahead and let Bennett nap in the room, and then we planned to go to an alehouse adjacent to the stadium for lunch, being sure to make it in time for the 12:40 game. that’s probably the plan we should have stuck with, but it wasn’t. After discussing our options, we decided instead to stay in our room and save money by eating sandwiches for lunch. We still left with plenty of time to make the 20-minute drive, park, and buy tickets — in theory. It turned out that the hour and ten minutes we allowed for this process would only get us about halfway there. Traffic was a complete nightmare, and parking was even worse. By the time we approached the stadium by car, we were already significantly late, but then we had to park forever away. Really I think it was at least a 20-minute walk, and we had to pay $20 for the spot! Not the best start to what was supposed to be the highlight of Justin’s trip: visiting MLB park #19 on his quest to see all 30. Things turned around a bit when we went to the ticket kiosk, though. We were looking for cheap seats in the shade when a girl came around with two extra tickets. She had four season tickets, but wasn’t able to find people to come with her and her sister that day. They were $44 tickets, and we bought them for $20 each! Turns out the seats were on first base side, 17 rows up, and in the shade (until about the 7th inning, at least)! It really (almost) made up for the terrible experience getting there. We had great seats at a great price! to make it even better, the Mariners (who had been down 7 to 2 when we got there), ended up winning 9-7! Bennett did pretty well, and he delighted neighboring fans with his cuteness. 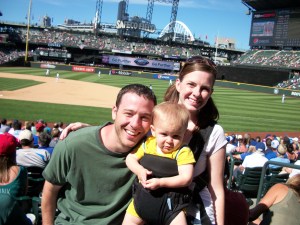 I did take him to a clear area in a corner for a bit to let him run around, so that helped him empty some of the ants out of his pants! I also got him a moose keychain to keep him busy when we got back to our seat. That’s about all we did — it was after 5 when we got back to our room, and neither of us was hungry for dinner yet. I fed and bathed Bennett, and then it was too late to take him out anywhere, so we just ordered pizza! It’s just as well. We have to get our stuff together quickly tomorrow and be on the road to Portland by 8 a.m.! Justin starts his conference tomorrow. Boo.

I'd love to hear your thoughts! Cancel reply